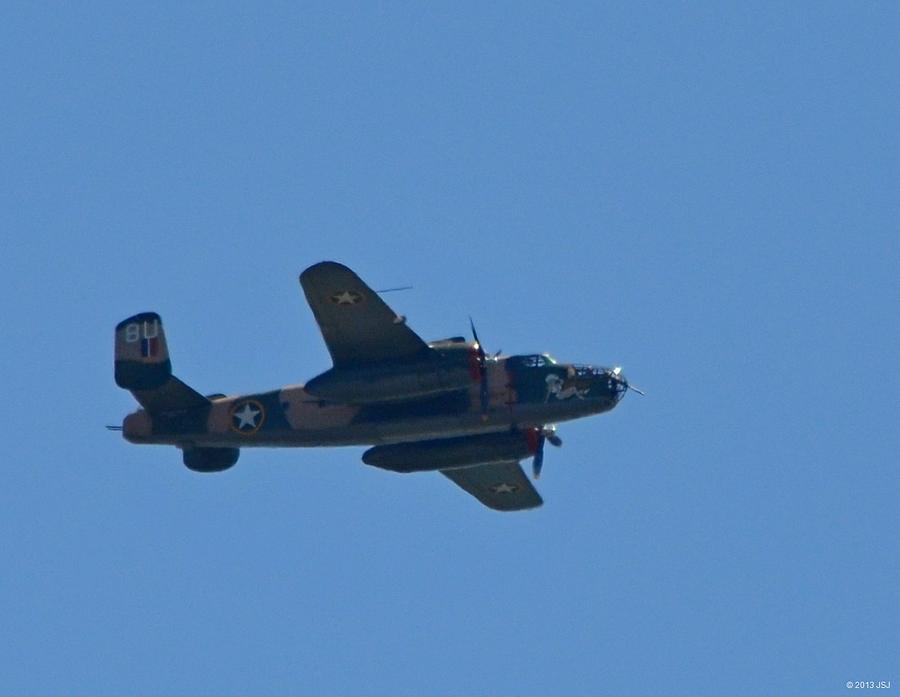 A total of three Commemorative Air Force B-25B Mitchell aircraft were flying out of Destin Airport in Northwest Florida (Show Me, Yellow Rose and Miss Mitchell) the weekend of 20-21 April 2013 when this photo was taken over San Destin Golf and Beach Resort. Jimmy Doolittle used airstrips in Northwest Florida to train the 16 Army Air Forces bomber crews to take off from the short deck of the Navy aircraft carrier USS Hornet.

B-25B Mitchell WWII Medium Bomber No 02344 specially painted to commemorate the 70th Anniversary of the "Doolittle Raid" over Tokyo on 18 April 1942 as flown by pilot and mission commander Lieutenant Colonel Jimmy Doolittle from the USS Hornet aircraft carrier on a one-way "suicide mission" during the first air raid on the Japanese home islands.

This aircraft is actually from The Missouri Wing of the Commemorative Air Force (CAF) affectionately known as "Show Me" No 1385 based in St. Charles, Missouri. It has a bomb payload of 3,000 pounds and fires 13.50 caliber machine guns. This aircraft is one of only a handful left in flying condition out of 10,000 built during World War II.

General/Doctor James Harold "Jimmy" Doolittle, USAF (December 14, 1896 – September 27, 1993) earned the Medal of Honor for his leadership and valor while commanding the Doolittle Raid of 16 aircraft, which resulted in "only" 5 casualties, but successfully boosted morale for the Americans after the Japanese attack on 7 December 1941 in Pearl Harbor, Hawaii.

Thank you Bob Fromm for featuring my photo artwork "Close Up Of Yellow Rose WWII B25 Bomber Over Florida 21 April 2013" in the Flight FAA Group! ~Jeff at JSJ Photography