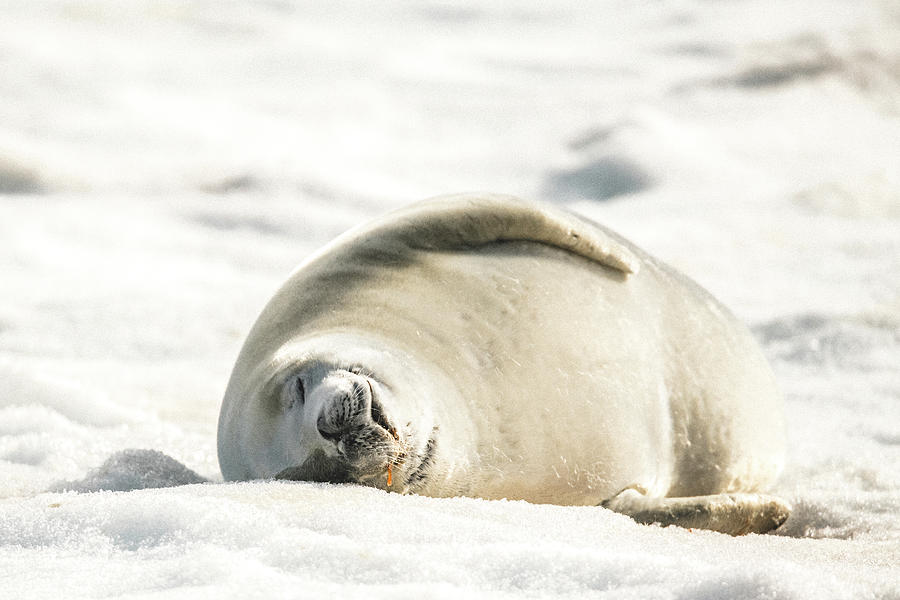 A crabeater seal with bloody drool pile on a small iceberg off Ukrainian Vernadsky Research Station, Marina Point, Galindez Island, Antarctica, on 4 February 2020 from a zodiac boat on the expedition ship Ocean Nova.

The crabeater seal (Lobodon carcinophaga), also known as the krill-eater seal, is a true seal with a circumpolar distribution around the coast of Antarctica. They are medium- to large-sized (over 2 m in length), relatively slender and pale-colored, found primarily on the free-floating pack ice that extends seasonally out from the Antarctic coast, which they use as a platform for resting, mating, social aggregation and accessing their prey. They are by far the most abundant seal species in the world. While population estimates are uncertain, there are at least 7 million and possibly as many as 75 million individuals. This success of this species is due to its specialized predation on the abundant Antarctic krill of the Southern Ocean, for which it has uniquely adapted, sieve-like tooth structure. Indeed, its scientific name, translated as "lobe-toothed (lobodon) crab eater (carcinophaga)", refers specifically to the finely lobed teeth adapted to filtering their small crustacean prey.

Despite its name, crabeater seals do not eat crabs. As well as being an important krill predator, the crabeater seal is an important component of the diet of leopard seals (Hydrurga leptonyx), which are responsible for 80% of all crabeater pups deaths.

Adult seals (over five years old) grow to an average length of 2.3 m (7.5 ft) and an average weight of around 200 kg (440 lb). Females are on average 6 cm (2.4 in) longer and around 8 kilograms (18 lb) heavier than males, though their weights fluctuate substantially according to season; females can lose up to 50% of their body weight during lactation, and males lose a significant proportion of weight as they attend to their mating partners and fight off rivals. During summer, males typically weigh 200 kilograms (440 lb), and females 215 kilograms (474 lb). A molecular genetic based technique has been established to confirm the sex of individuals in the laboratory. Large crabeater seals can weigh up to 300 kg (660 lb). Pups are about 1.2 metres (3.9 ft) in length and 20 to 30 kilograms (44 to 66 lb) at birth. While nursing, pups grow at a rate of about 4.2 kilograms (9.3 lb) a day, and grow to be around 100 kilograms (220 lb) when they are weaned at two or three weeks.

These seals are covered mostly by brown or silver fur, with darker coloration around flippers. The color fades throughout the year, and recently molted seals appear darker than the silvery-white crabeater seals that are about to molt. Their body is comparatively more slender than other seals, and the snout is pointed. Crabeater seals can raise their heads and arch their backs while on ice, and they are able to move quickly if not subject to overheating. Crabeater seals exhibit scarring either from leopard seal attacks around the flippers or, for males, during the breeding season while fighting for mates around the throat and jaw.

Pups are born with a light brown, downy pelage (lanugo), until the first molt at weaning. Younger animals are marked by net-like, chocolate brown markings and flecks on the shoulders, sides and flanks, shading into the predominantly dark hind and fore flippers and head, often due to scarring from leopard seals. After molting, their fur is a darker brown fading to blonde on their bellies. The fur lightens throughout the year, becoming completely blonde in summer.

Crabeaters have relatively slender bodies and long skulls and snouts compared to other phocids. Perhaps their most distinctive adaptation is the unique dentition that enables this species to sieve Antarctic krill. The postcanine teeth are finely divided with multiple cusps. Together with the tight fit of the upper and lower jaw, a bony protuberance near the back of the mouth completes a near-perfect sieve within which krill are trapped.

Wow this is good stuff Jeff.....I admire your sense of adventure. L/F

Thanks Constance for the L/F/C! ~Jeff at JSJ Photography