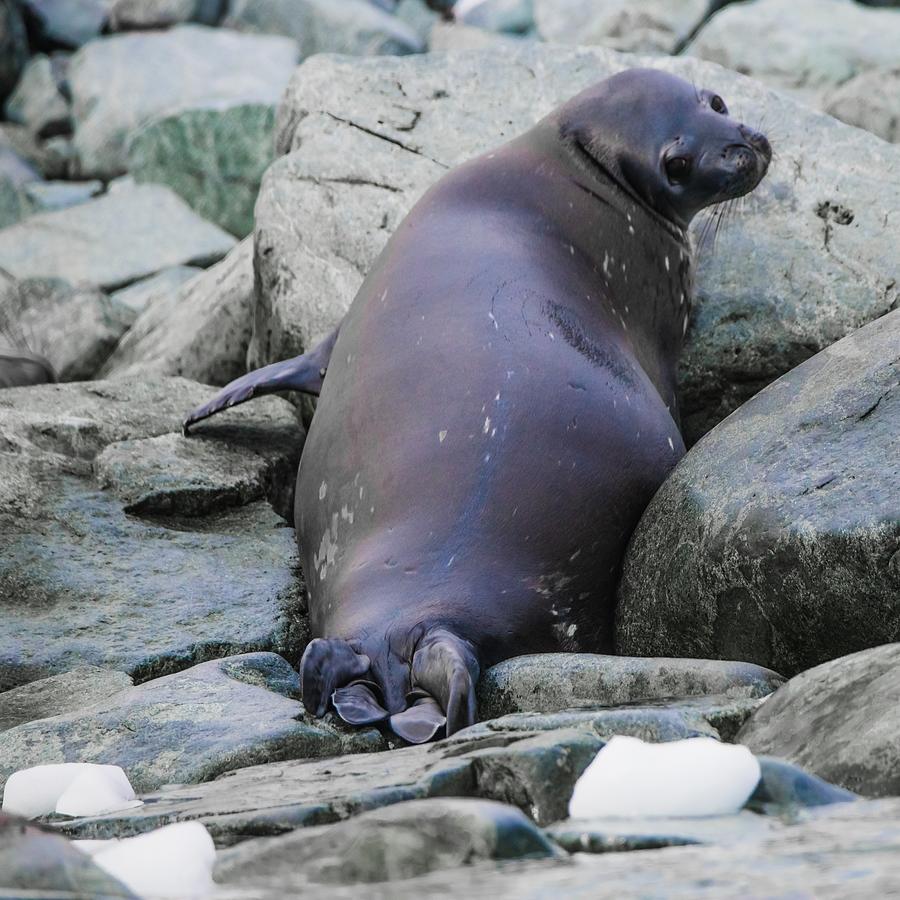 A leopard seal looks back from Spert Island, Palmer Archipelago, Antarctica on 3 FEB 2020. Leopard seals are great hunters--even if they do not follow directions.

The leopard seal (Hydrurga leptonyx), also referred to as the sea leopard, is the second largest species of seal in the Antarctic (after the southern elephant seal). Its only natural predator is the killer whale. It feeds on a wide range of prey including cephalopods, other pinnipeds, krill, birds and fish. It is the only species in the genus Hydrurga. Its closest relatives are the Ross seal, the crabeater seal and the Weddell seal, which together are known as the tribe of Lobodontini seals. The name hydrurga means "water worker" and leptonyx is the Greek for "small clawed".

The leopard seal has a distinctively long and muscular body shape, when compared to other seals. This species of seal is known for its massive reptilian-like head and jaws that allow it to be one of the top predators in its environment. A notable key feature of leopard seals is its counter-shaded coat. A counter-shaded coat is when the dorsal side of the coat is darker than ventral side. Leopard seals have a silver to dark gray blended coat that makes up its distinctive "leopard" coloration with a spotted pattern, whereas the ventral side of the coat is paler in color—ranging from white to light gray. Females are slightly larger than the males. The overall length of this seal is 2.4–3.5 m (7.9–11.5 ft) and weight is from 200 to 600 kilograms (440 to 1,320 lb). They are about the same length as the northern walrus, but usually less than half the weight.

Another notable characteristic of leopard seals are their short, clear whiskers that are used to sense their environment. Leopard seals have an enormous mouth relative to their body size.[6] The front teeth are sharp like those of other carnivores, but their molars lock together in a way that allows them to sieve krill from the water, in the manner of the crabeater seal. Since leopard seals are "true" seals, they do not have external pinnae, or ears, but they do have an internal ear canal that leads to an external opening. Their hearing in air is similar to that of a human, but scientists have noted that leopard seals use their ears in conjunction with their whiskers to track prey under water.[

Thank you VERY MUCH Mariola Bitner for featuring my photo artwork "Don't Look Back - Leopard Seal" in the FAA group Wildlife ONE A DAY on 05/04/2020! ~Jeff at JSJ Photography

Thank you VERY MUCH Frank J Casella for featuring my photo artwork "Don't Look Back - Leopard Seal" in the FAA group Square Format Photography on 04/22/2020! ~Jeff at JSJ Photography