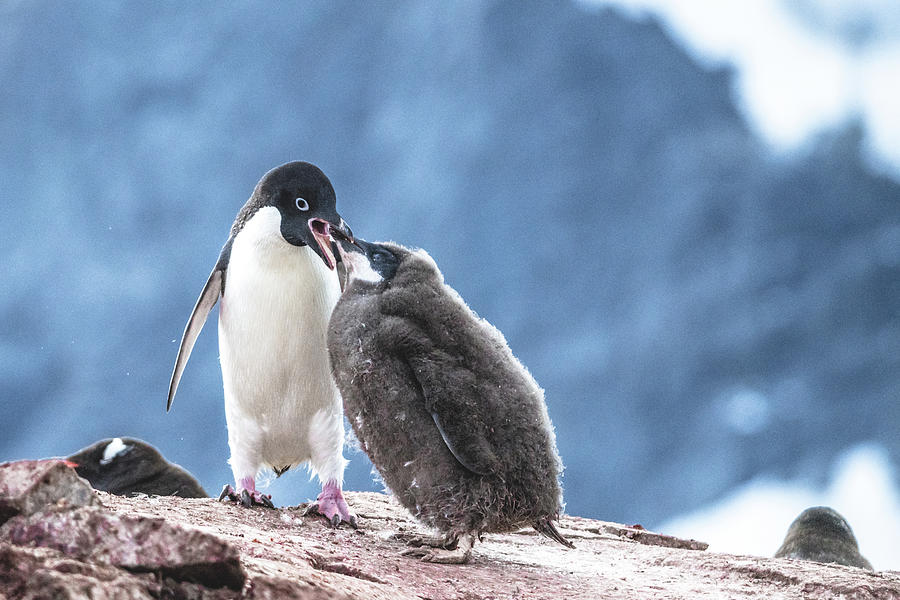 An Adélie penguin feeds a young baby on Petermann Island, Wilhelm Archipelago, Antarctica on 4 FEB 2020. Adélie penguins feed on tiny aquatic creatures, such as shrimp-like krill, but also eat fish and squid. The adults regurgitate the krill or fish for to feed their young.

In zoological terms, penguins are classified as birds (Aves). Penguins are members of the Spheniscidae family, which is an order of flightless birds that live in the southern hemisphere of Earth. They share all of the common traits that birds are characterized as having.

Petermann Island is a small, low and rounded island, lying off the northwest coast of Kiev Peninsula in Graham Land, Antarctica, a short distance south of Booth Island and the Lemaire Channel. It is a popular tourist destination.

The island is 1.8 km (1.1 mi) long and 1.2 km (0.75 mi) across. It rises steeply to elevations of up to 250 m from a rocky coastline with raised pebble beaches. It has volcanic origins, with about half the land surface covered by a permanent, crevassed icecap. Ice-free areas have a sparse vegetation of mosses and lichens.

The island was discovered by a German expedition of 1873–74, who named it after geographer August Petermann. The French Antarctic Expedition of 1908-10 wintered over aboard ship in a cove on the southeast side of the island, named Port Circumcision because it was spotted 1 January 1909, the traditional day for the Feast of the Circumcision.

The bedrock of the island is Mesozoic granite, with xenoliths and aplite dikes.

The island has been identified as an Important Bird Area (IBA) by BirdLife International because it supports a breeding colony of about 3000 pairs of gentoo penguins. Other birds nesting at the site in smaller numbers include Adélie penguins, imperial shags, Wilson's storm petrels and south polar skuas.

What a precious, tender moment captured beautifully, Jeff! Congratulations on your image's recognition as a Dawn's Delight! F/L

Congratulations Jeff, your work is Featured in "Birds In Focus" I invite you to place it in the group's "2020 Featured Image Archive" Discussion!! L/Tweet

Thank you VERY MUCH Don Columbus for featuring my photo artwork "Feeding Time on Petermann Island" in the FAA group Birds In Focus on 05/23/2020! Thanks for the L/Tweet too! ~Jeff at JSJ Photography

Thanks Lena! ~Jeff at JSJ Photography

Thank you VERY MUCH Mariola Bitner for featuring my photo artwork "Feeding Time on Petermann Island" in the FAA group Wildlife ONE A DAY on 05/05/2020! ~Jeff at JSJ Photography

Such a beautiful moment captured! Congratulations on your well deserved Dawn's Delight recognition in Wild Birds of the World group!!

Remarkable shot! Congratulations on your features and your Dawn's Delight!

What a wonderful thing to be able to see and capture this tender moment -- well done! Congrats on your Dawn's Delight! l/f

What a sweet little fluffball. Cute capture. Congratulations for being chosen as a Dawn’s Dellghts in the Wild Birds of the World group. L/tw

Congratulations on being named among ‘Dawn’s Delights’ this week. This image has that extra something special that makes it an extraordinary image. Wonderful interaction between adult and child with strong composition!

Thank you VERY MUCH Dawn Currie for selecting my photo artwork "Feeding Time on Petermann Island" as one of this week's "Dawn's Delights" in the FAA group Wild Birds of the World on 04/30/2020! ~Jeff at JSJ Photography

Thank you for submitting this fine image of this identified wild bird. It is now featured on the homepage of Wild Birds Of The World - A Nature Photography Group. Please take a moment to add it to the 2020 Thanks and Features Archive discussion for additional visibility.

Thank you VERY MUCH Dawn Currie for featuring my photo artwork "Feeding Time on Petermann Island" in the FAA group Wild Birds of the World - A Nature Photography Group on 04/30/2020! ~Jeff at JSJ Photography