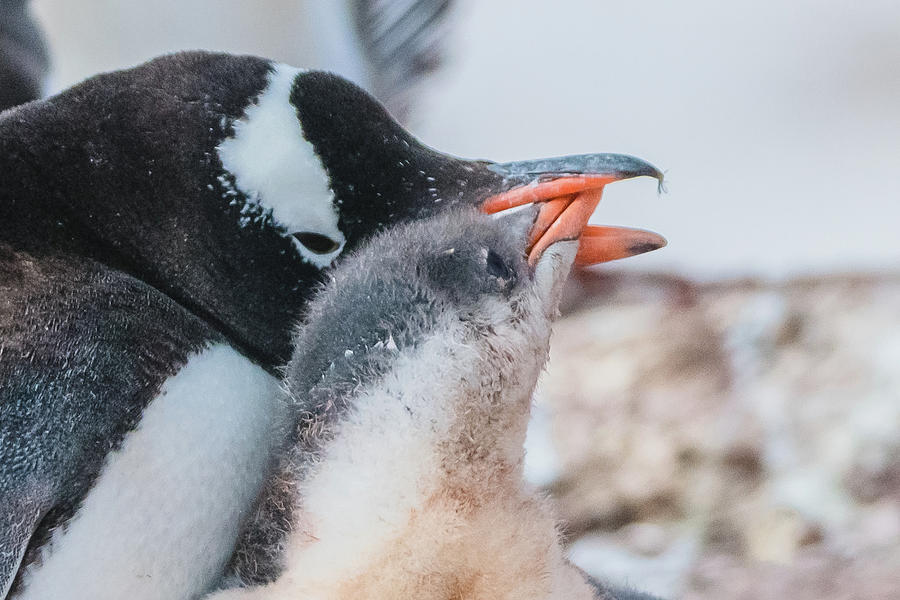 Macro close-up of a gentoo penguin with chick in the rookery on Petermann Island, Wilhelm Archipelago, Antarctica near Groussac Refuge (Argentina), Graham Land, with Antarctica 21 on the expedition ship Ocean Nova on 4 February 2020.

The gentoo penguin (/ˈdʒɛntuː/ JEN-too) (Pygoscelis papua) is a penguin species in the genus Pygoscelis, most closely related to the Adélie penguin (P. adeliae) and the chinstrap penguin (P. antarcticus). The earliest scientific description was made in 1781 by Johann Reinhold Forster with a type locality in the Falkland Islands. They call in a variety of ways, but the most frequently heard is a loud trumpeting which the bird emits with its head thrown back.


Petermann Island is a small, low and rounded island, lying off the northwest coast of Kiev Peninsula in Graham Land, Antarctica, a short distance south of Booth Island and the Lemaire Channel. It is a popular tourist destination.


Description
The island is 1.8 km (1.1 mi) long and 1.2 km (0.75 mi) across. It rises steeply to elevations of up to 250 m from a rocky coastline with raised pebble beaches. It has volcanic origins, with about half the land surface covered by a permanent, crevassed icecap. Ice-free areas have a sparse vegetation of mosses and lichens.[1]

History
The island was discovered by a German expedition of 1873–74, who named it after geographer August Petermann. The French Antarctic Expedition of 1908-10 wintered over aboard ship in a cove on the southeast side of the island, named Port Circumcision because it was spotted 1 January 1909, the traditional day for the Feast of the Circumcision.

Geography
The bedrock of the island is Mesozoic granite, with xenoliths and aplite dikes.

Panorama - penguin colonies, cruise ship and tourists, Petermann Island
The island has been identified as an Important Bird Area (IBA) by BirdLife International because it supports a breeding colony of about 3000 pairs of gentoo penguins. Other birds nesting at the site in smaller numbers include Adélie penguins, imperial shags, Wilson's storm petrels and south polar skuas.

Groussac Refuge
Naval refuge Groussac in 2013
Country Argentina
Location in Antarctic Peninsula Petermann Island
Graham Land
Antarctica
Administered by Argentine Navy
Established 1955
Named for Paul Groussac
Type Seasonal
Status Operational
Groussac Refuge (65°10'33"S 64°08'10"W) is an Argentine naval refuge (originally called Hippolyte Bouchard) in Antarctica, located on the southern coast of the Port Circumcision, on Petermann Island, next to the west coast of the Antarctic Peninsula. The refuge was inaugurated on February 6, 1955 and is operated by the Argentine Navy and was occupied periodically by personnel of the British Antarctic Survey of the former Faraday Station. The refuge take place in the middle of a colony of Gentoo penguin. Its current name is in honor of Paul Groussac, a French writer and historian who lived in Argentina, author of a plea on the Argentine claim of the Malvinas Islands and biographies of Argentine national heroes.

Thank you for submitting this fine image of this identified wild bird. It is now featured on the homepage of Wild Birds Of The World - A Nature Photography Group. Please take a moment to add it to the 2020 Thanks and Features Archive discussion for additional visibility.

Thank you VERY MUCH Dawn Currie for featuring my photo artwork "Mamma Make Me Breakfast Close-Up" in the FAA group Wild Birds Of The World - A Nature Photography Group on 05/14/2020! ~Jeff at JSJ Photography

Thank you VERY MUCH Doug Norkum for featuring my photo artwork "Mamma Make Me Breakfast Close-Up" in the FAA group Macro Marvels on 05/10/2020! ~Jeff at JSJ Photography

Thanks Alex! ~Jeff at JSJ Photography