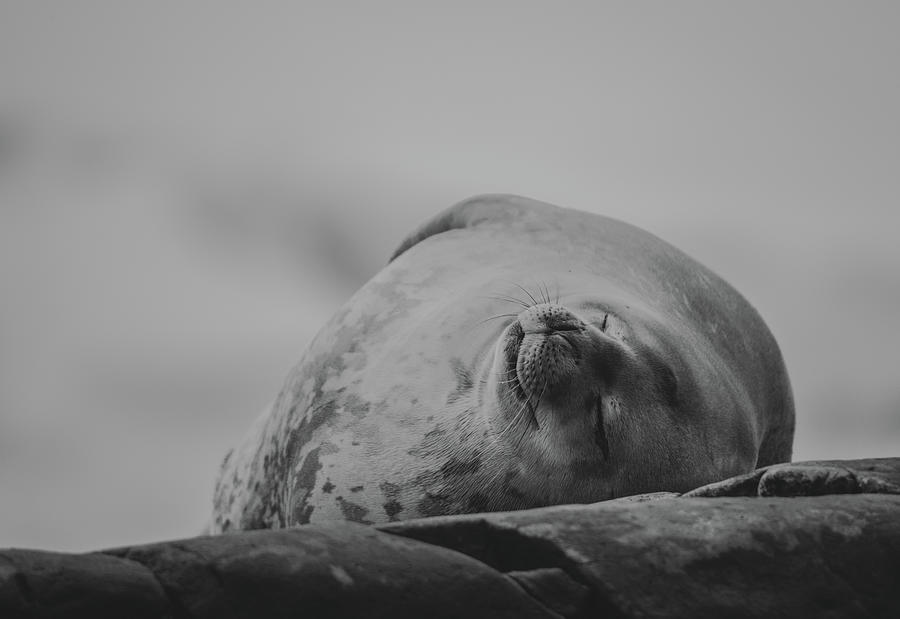 Do Not Awaken - Makes Me Crabby BW

Do Not Awaken - Makes Me Crabby BW

The crabeater seal (Lobodon carcinophaga), also known as the krill-eater seal, is a true seal with a circumpolar distribution around the coast of Antarctica. They are medium- to large-sized (over 2 m in length), relatively slender and pale-colored, found primarily on the free-floating pack ice that extends seasonally out from the Antarctic coast, which they use as a platform for resting, mating, social aggregation and accessing their prey. They are by far the most abundant seal species in the world. While population estimates are uncertain, there are at least 7 million and possibly as many as 75 million individuals.[2] This success of this species is due to its specialized predation on the abundant Antarctic krill of the Southern Ocean, for which it has uniquely adapted, sieve-like tooth structure. Indeed, its scientific name, translated as "lobe-toothed (lobodon) crab eater (carcinophaga)", refers specifically to the finely lobed teeth adapted to filtering their small crustacean prey.[3] Despite its name, crabeater seals do not eat crabs. As well as being an important krill predator, the crabeater seal is an important component of the diet of leopard seals (Hydrurga leptonyx), which are responsible for 80% of all crabeater pups deaths.

Thanks for the L/F/C Alex! ~Jeff at JSJ Photography

Thank you VERY MUCH Nader Rangidan for featuring my photographic artwork "Do Not Awaken - Makes Me Crabby BW" in the FAA group Black and White Photography on 04/25/2020! ~Jeff at JSJ Photography

Congratulations! Your outstanding artwork has been chosen as a FEATURE in the “The Gray Scale Outdoors” group on Fine Art America — You are invited to post your featured image to the featured image discussion thread as a permanent place to continue to get exposure even after the image is no longer on the Home Page.

Thank you VERY MUCH Allan Van Gasbeck for featuring my photographic artwork "Do Not Awaken - Makes Me Crabby BW" in the FAA group The Grayscale Outdoors on 04/25/2020! ~Jeff at JSJ Photography